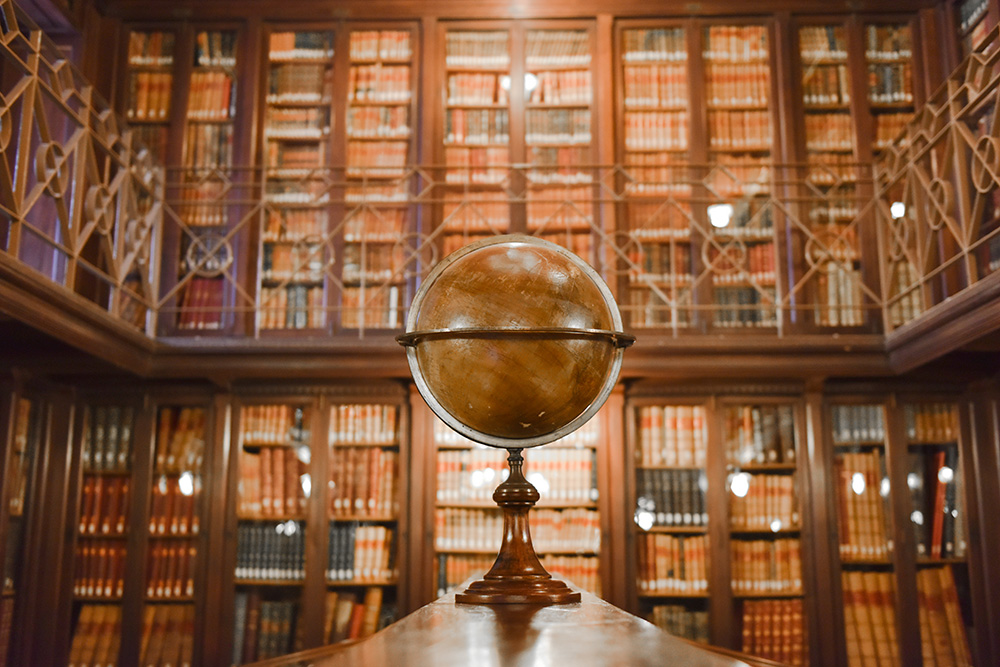 The books of Freemasons, workers and anarchists

Arús Library, located on Passeig Sant Joan in Barcelona, ​​is a reference centre for social movements from the 19th and 20th centuries. Founded in 1895 as a result of Rossend Arús’ will, the Library is located in the house where Arús used to live.

In its beginnings, it housed over 24.000 volumes, which have been expanded thanks to further donations and acquisitions. 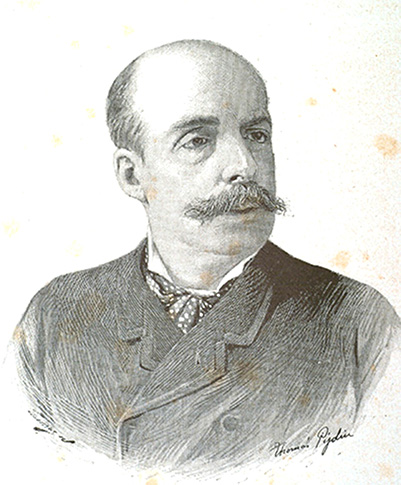 Rossend Arús was born in Barcelona in 1845. He was a philanthropist and free thinker who was detached from the ideas of his time. He was a deeply anticlerical and tolerant person, who lived as a partner for 8 years and did not marry. His partner was called Dolores Bermúdez de Arús. Theatre fan, theatre promoter and entrepreneur, also an amateur actor and dramatist. A social activist who was co-founder of Centre Català, the first Catalan political organisation along with Valentí Almirall, Pitarra …

Son of Father Arús i Cuixart, a distinguished wholesale trader, from a wealthy family in Hospitalet de Llobregat, and Teresa Arderiu i Pons, originally from Das (Cerdanya). With regards to his character, we could define him as a man who enjoyed jokes and had a good sense of humour, a democrat with a federal republican ideology, a Catalanist freethinker and freemason, a philanthropist deeply concerned with the development of the people who surrounded him.

Rossend Arús began freemasonry on the 16th of May 1866 at the Fraternity Lodge number 1 in Barcelona, and in 1884 he had already achieved level 33 (The highest level according to the Scottish Rite). He was also a member of other lodges: The Truth, number 17 (Barcelona), the Great Catalan Capital, Purity number 2 (Lisbon), Iberian Union, number 252 (Madrid), La Sagesse (Barcelona), Perfetta Unione (Italy) and the Great Council of Portuguese freemasons. He created the Avant number 149 lodge (Barcelona) of a Catalanist nature and of which he became Venerable Master. In 1886, the Constituent Assembly of the Great Catalan Regional Symbolic Lodge took place and Rossend Arús was chosen as the Great Master of Catalan freemasonry.

In order to diffuse his ideas, democratic values, freedom and tolerance amongst a society which was extremely morally strict, Rossend Arús promoted and managed several magazines and periodicals like La Llumanera de Nova York, La Luz… and also collaborated on satirical publications of the time, such as the L’Esquella de la Torratxa or La Campana de Gràcia.

Arús died in 1891. In his will, he nominated executors and confidence heirs Valentí Almirall and Antoni Farnés to make use of his funds in the way they best saw fit in order to fulfil his wishes, which he had communicated to them orally: the creation of the Arús Public Library.

The Arús Public Library was inaugurated in 1895 with the intention of being a library for the education of the working class.

The Arús Library had some 24,000 volumes when it opened that covered all areas of knowledge of the moment and that remain in the library to this day. This collection includes material as diverse as philosophy, religion, social sciences, law, languages, biology, botany, medicine, art, music, literature, geography and history. As well as other general works such as dictionaries, press, etc.

The fact that the library closed to the public in 1939 and didn’t reopen again until 1967 meant that it avoided the purifying Francoist purges and the collection found today remains mostly intact.

Currently, the Public Arús Library is a specialised research centre of history and culture from the 19th century and the beginning of the 20th century, which has maintained this original collection which is testament to the time in which it was founded, it also has a special collection covering the labour movement, anarchism and freemasonry, which have been completed gradually thanks to donations from entities and individuals.

The current collection has 75,323 volumes. 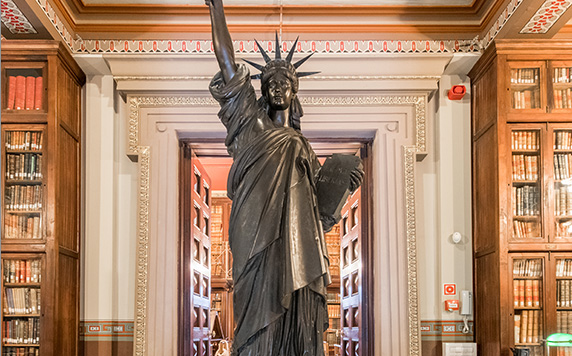 The grand staircase references the Sanctuary of Athena in Greece, a sanctuary dedicated to freedom that ends with the reproduction of New York’s Statue of Liberty. A reduced reproduction with some differences: it doesn’t feature the broken chains around her feet and the inscription on the tablet that she holds in her hand which, in New York, features the date of independence, in Barcelona it says Alma libertas which means nourishing freedom, that protects, in other words it disassociates freedom from any historical event. The Arús Library is a space of freedom. 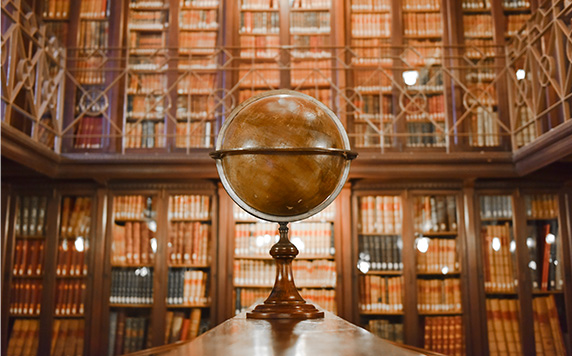 It is the original one from the Library. There are 9 panels on the ceiling that previously featured pictorial representations of museums, libraries and educational centres such as the British Library or the Vatican Library. The Arús Library was closed for 28 years and the paintings were lost. It was refurbished in the 1980’s but they were unrecoverable. Nowadays we could call this room the Knowledge Room.<br /> The objective of the owners of the Arús Library was to educate the popular classes. They promoted multidisciplinary education, knowledge; comprehension of reality is the only path towards freedom. 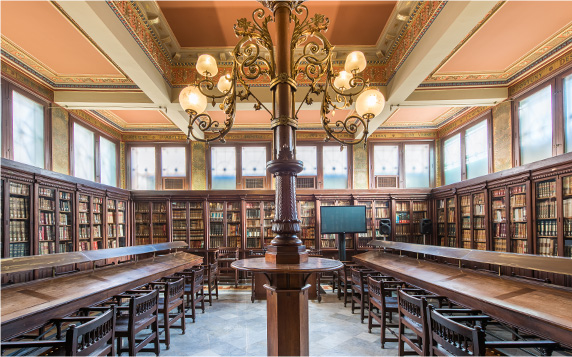 The room where the Arús Library’s collection is displayed.<br /> The current definition of the Arús Library is that it is a specialised research Library. The Arús Library had 3 objectives: to educate, inform and distract.<br /> For eighty years, it was a general library of public access, which doesn’t mean that it was the city’s first public library. However, it was the first modern library, of general access to modernity, which was expressed in relevant points: it had an exhibition room from the very first day where the most emblematic pieces or important documents in printing history were displayed. 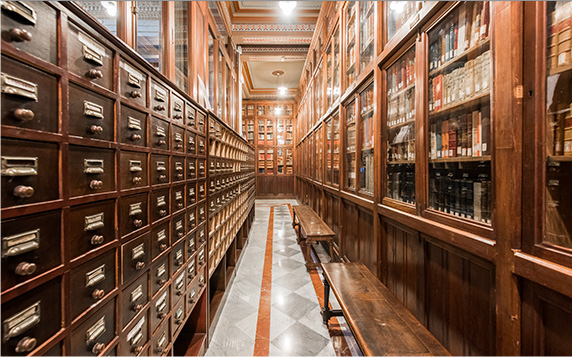 There is currently an exhibition of relevant books from the Arús Library’s collection. Reference must be made to the bathroom, which is large for the period, and is also public. 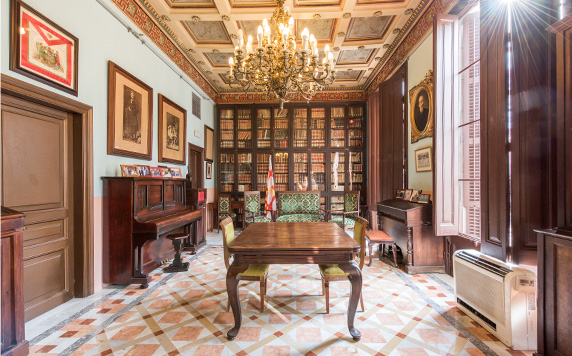 It was originally a music room where users could come and play the musical scores. There is a piano and a harmonium, which is a wind and keyboard instrument. The room has been refurbished.<br /> It was a multipurpose room which also served as a conference room and was overlooked by the Venus de Milo.

At present, the Arús Public Library is a specialized research centre on contemporary social movements. The centre is of public access, although it is mainly aimed, due to its specialisation, at researchers, university students or people interested in society in the nineteenth and twentieth centuries.